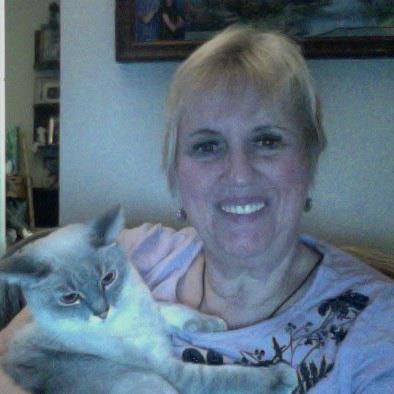 Scooter was found in my back yard about 2008.  She was a baby and Shadow found her and her brother by the fence one August afternoon. He was so happy to tell me about the kitties. But then they disappeared as mamma took them somewhere else. Three months later they reappeared! They were on the top of the roof of my house and my neighbors! So cute!  Then one day Scooter came over to the carport and would peek out from under the car and I started to feed her and talk to her. She then reappeared every evening at 5 pm to eat. One day I finally decided I would try to lure her into my utility room to catch her but she was too smart for that! So I found a cat trap that I borrowed and caught her. I brought her into my back bedroom and for one month would go in and talk to her and feed her until one day I picked her up!  She just melted in my arms! She was so beautiful!  After that I allowed her into the house and she became my "pet"  Shadow and mine of course!  I tried to capture her brother but he would have none of it! He had become a ferral cat as they say and wanted to stay that way!

I forgot to mention that I had just lost a cat of 19 years to kidney failure a month before!  I said I did not want another cat!  Of course, that was not in the cards for me! 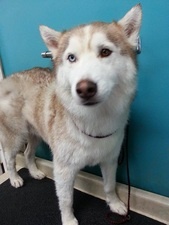 Tahoe was a rescue pup that my son had for about 8 years. Things did not work out for him as he was always an escape artist. Tahoe would manage to get out of every home he visited or lived in through the years via the windows or breaking out of the bottom of the fences and running through the neighborhood looking for his master. He was a sweet dog with lots of beautiful husky hair.  Tahoe was not happy toward the end of his stay with my son because my son had to work 12 hour shifts at work.  Tahoe missed him terribly and kept getting out because there was no one to watch him so he had to give him up.  WE hope Tahoe has found a new forever family but he will be in all of my books as a fun memory for us!

Ringo is the Main character in the first 3 books!

Ringo is a sweet, loving chihuahua and cannot wait to get your attention when you go to his home! He twirls around for treats and sits when you tell him to! You cannot but love this little guy as he worms his way into your heart in person and in the books as well. I hope you will enjoy all of my books with Ringo as the main character!

Mesa Downtown Festival 2019 is best festical to see lots of artwork. I am going to be the part of this festival in next month after finishing my https://www.goldenbustours.com/san-francisco-tours/

Janice,
Type in Lindaanncaseysmock on Amazon.com